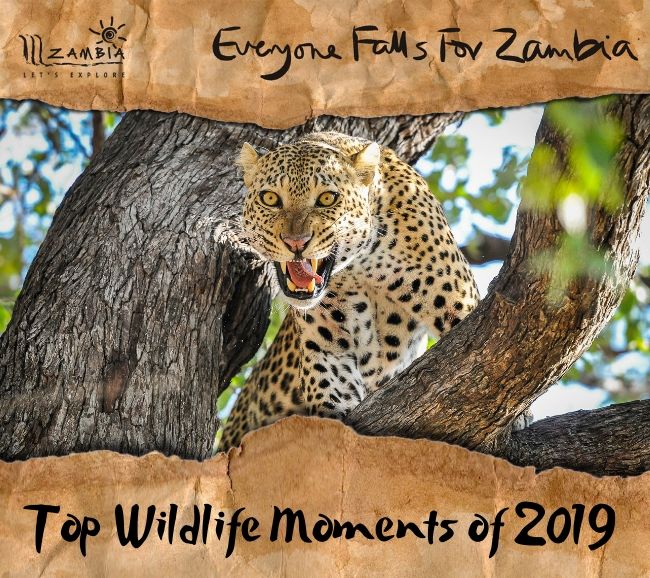 As we come to the end of 2019, we're looking back at the wild and wonderful moments that have left guests and guides speechless across Zambia.

From leaping lions to squashed crocodiles, here are Zambia's top wildlife moments of 2019. 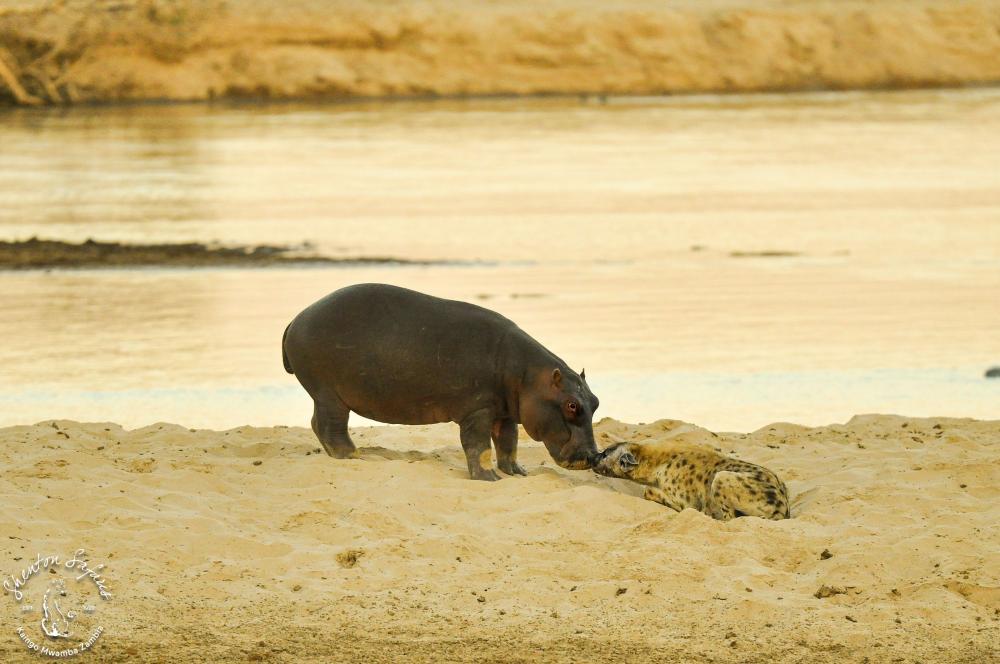 This young hippo and hyena were spotted playing on the banks of the Luangwa River. First seen smelling each other from a distance, the pair later touched noses before playing in the warmth of the rising sun.

2. Hunger strikes in the Kafue 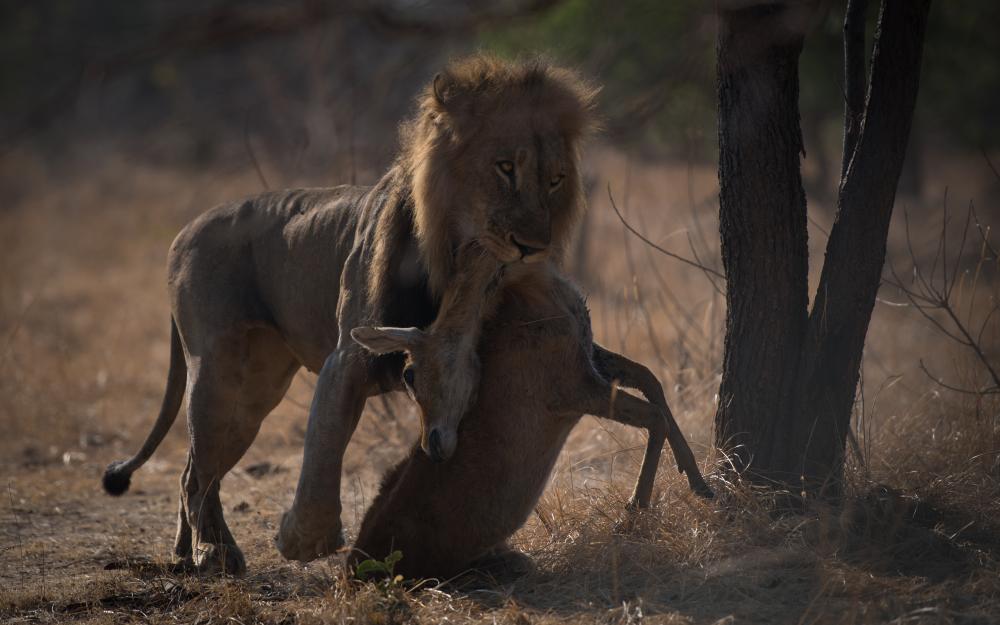 This hungry male lion was seen taking down a female puku in a dramatic hunt, witnessed by guests on their morning game drive - busting the long-standing myth that male lions don't hunt.

3. You've otter be kidding me! 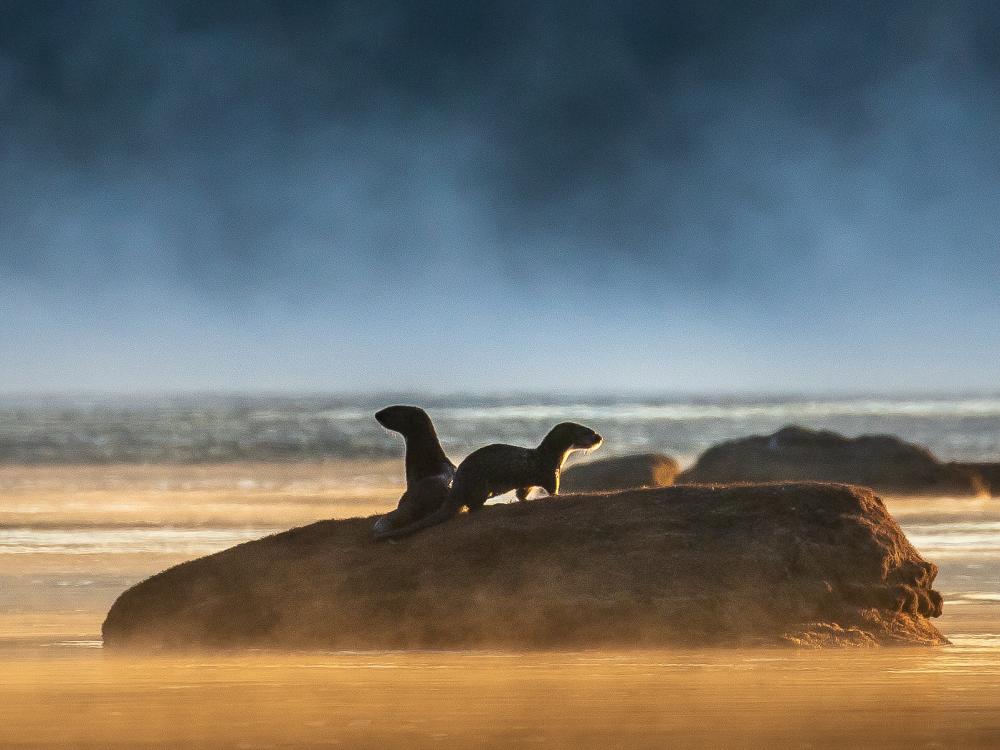 Imagine waking up to this - a pair of African clawless otters fishing on the Kafue River. An incredibly rare sighting made even more special by the morning light.

4. Four species and a funeral 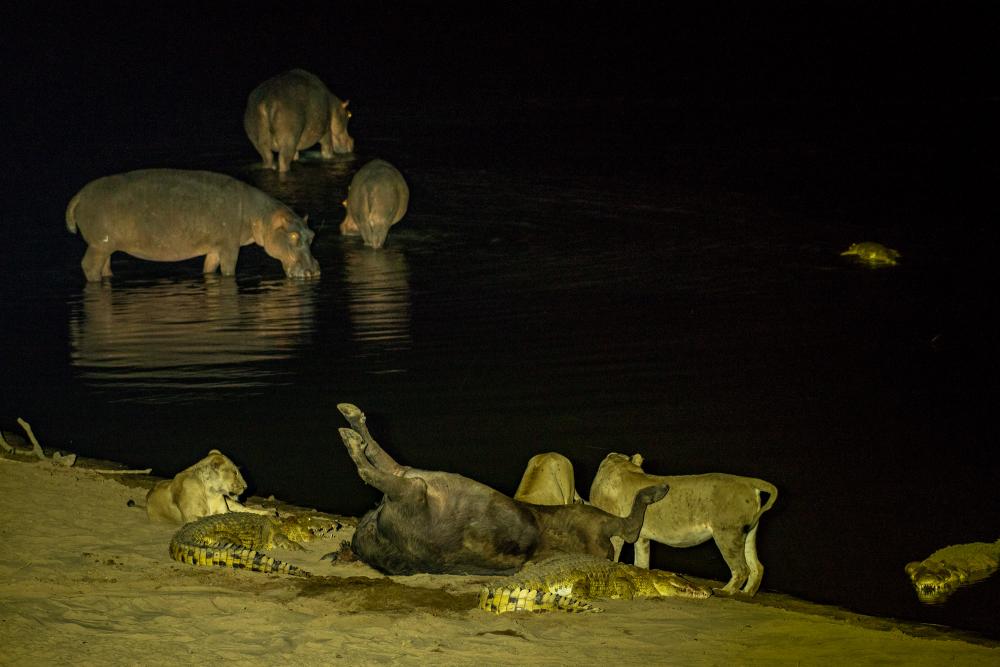 Crocs, hippos, lions and one unlucky buffalo made for an extraordinary sighting in South Luangwa National Park. The lions and hyenas fought over the buffalo carcass whilst the hippos mourned from the sidelines. 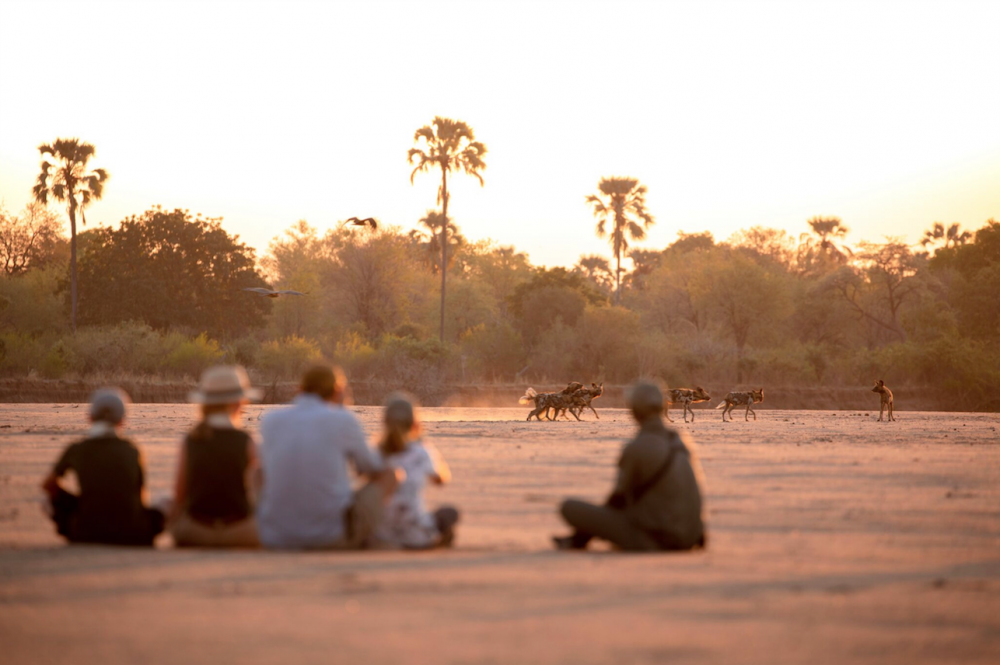 This peaceful moment was submitted by camp owner Grant Cumings who sat down with his family during a walking safari to observe a pack of wild dogs playing in front of them. Does it get any better than this? 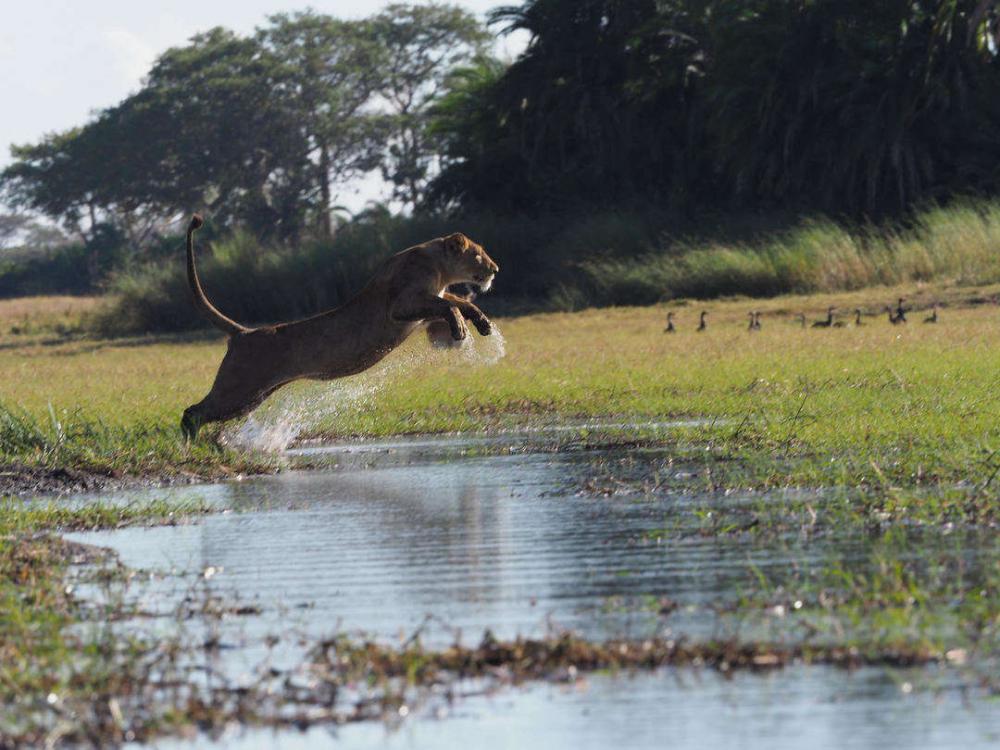 Wilderness Safaris' guide Isaac Kalio came across this exceptional sighting while on a boat safari with guests in Kafue National Park. He was able to anticipate the lioness’s next move, quickly steadying his camera in time to capture the lioness making a bold leap across the channel. 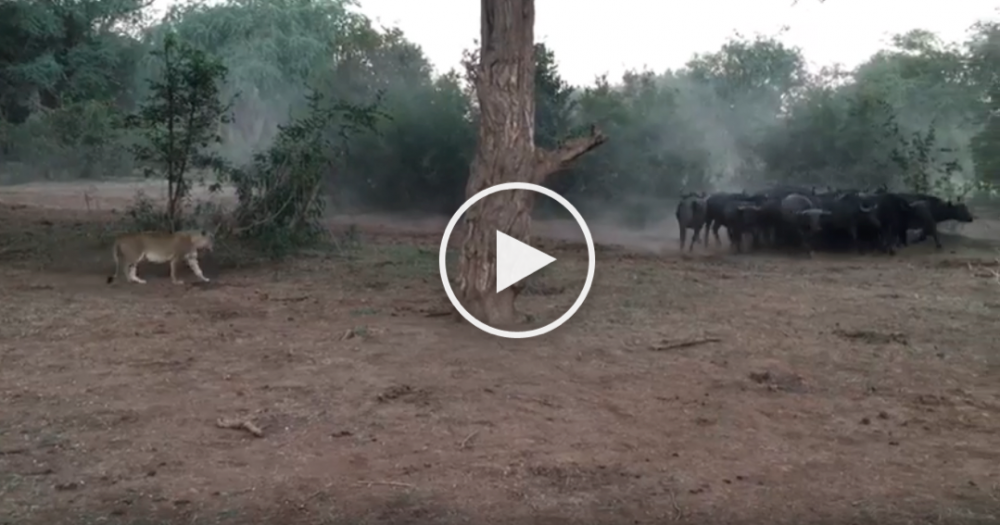 Guests in Zambia's Lower Zambezi National Park recently captured a tense standoff between a pride of hungry lions and a herd of brave buffalo. 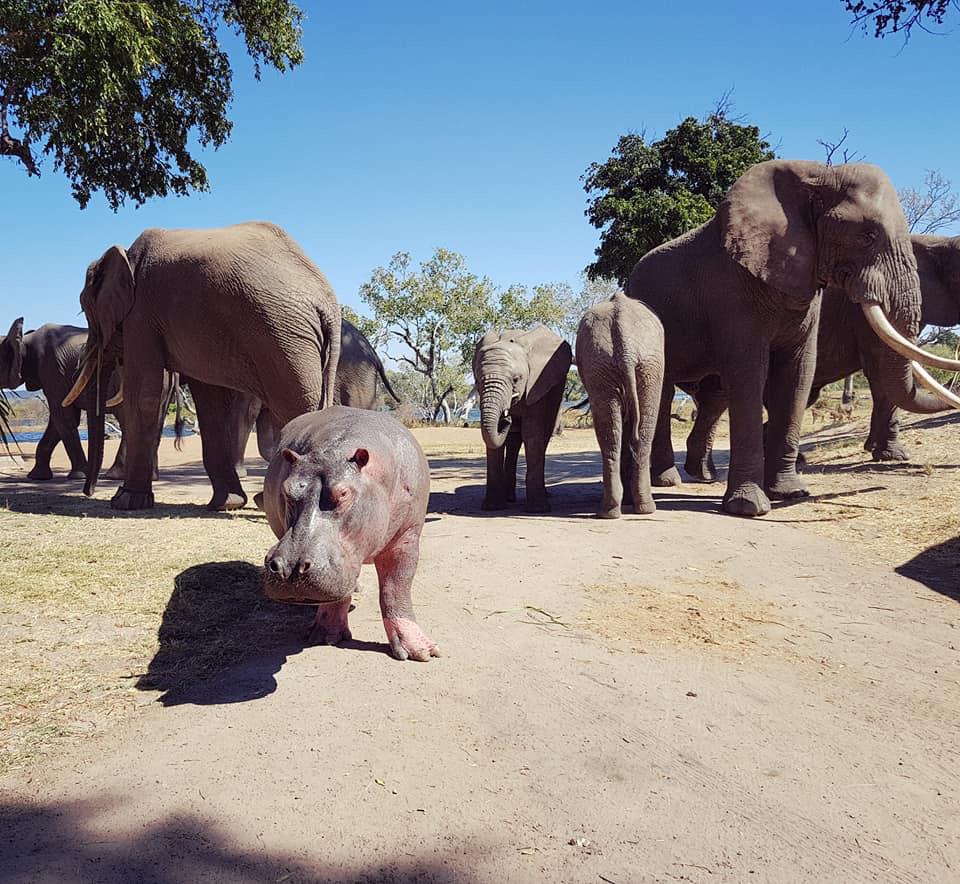 This year, a young hippo called "Sox" (named after his pink socks) has moved in with a family of rescued elephants at The Elephant Cafe in Livingstone. The hippo-phant sleeps and eats with the herd, and even plays in the Zambezi with the young elephants.

Moment by The Elephant Cafe in Livingstone. 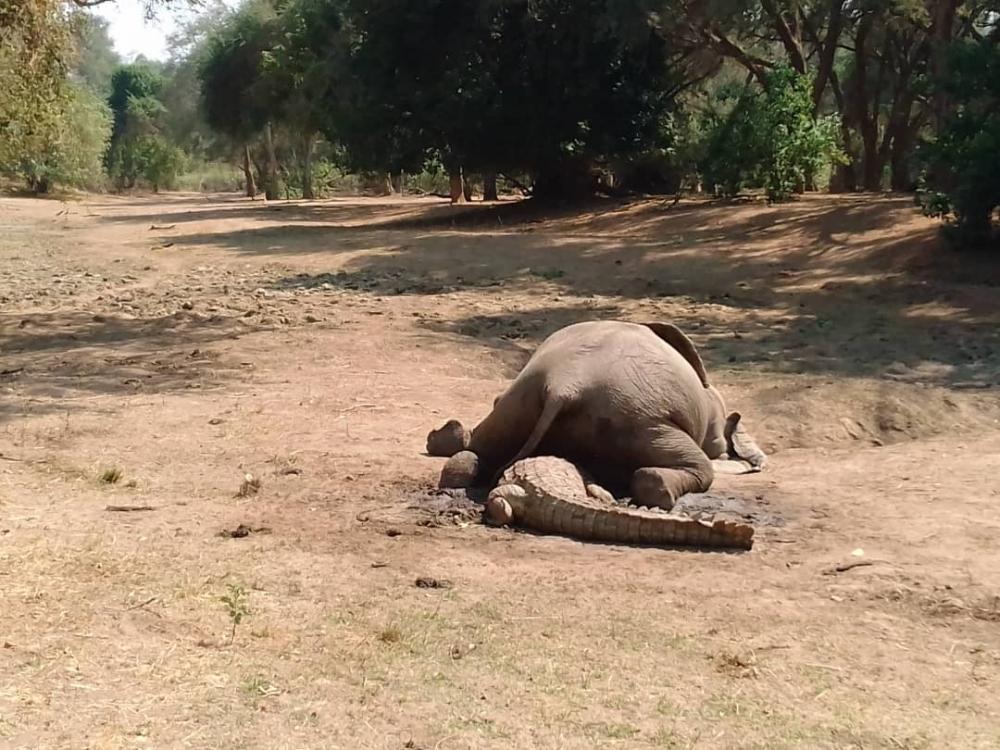 This crocodile, or "flat dog", was bizarrely found crushed underneath a 3-tonne elephant in Lower Zambezi National Park. We can only speculate as to what happened!

10. Never trust a tree with a big hole 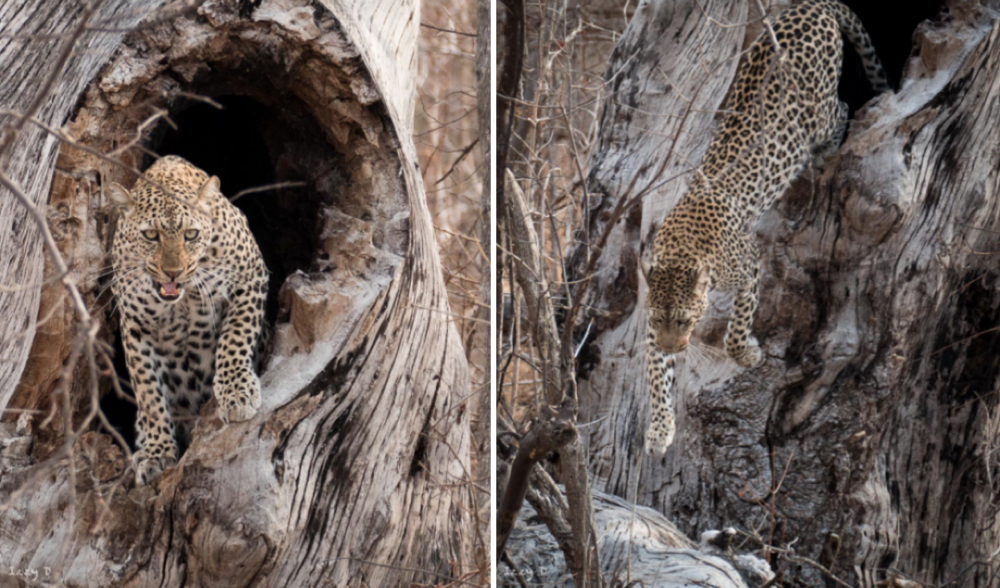 Never trust a tree with big hole: A lesson guests recently learned whilst on safari in South Luangwa National Park. The female leopard was spotted emerging from the hole of a dead tree where her cubs could be heard squealing - explaining her protective snarls at onlookers. 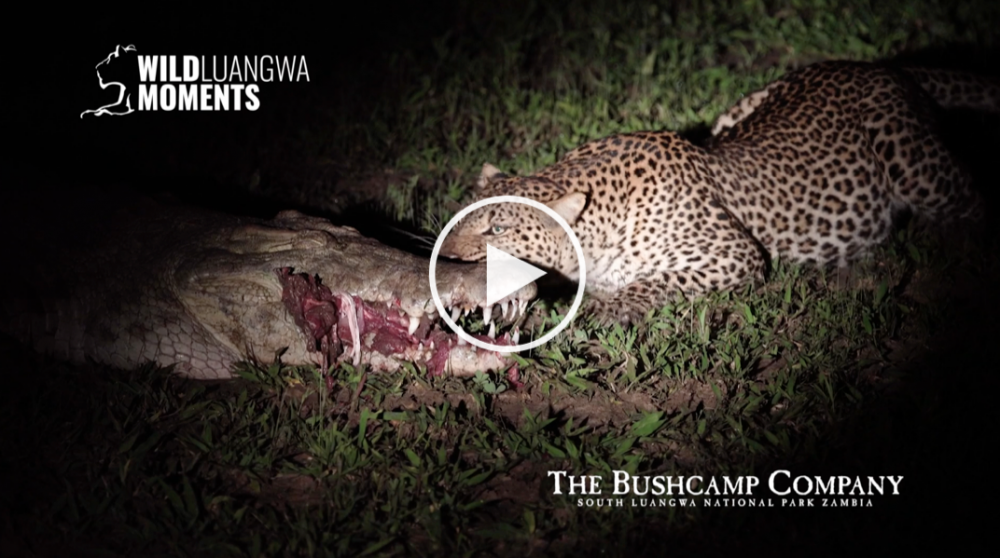 A huge Nile Crocodile is one of the world’s most fearsome predators, so it takes a lot of nerve, and some quick reactions, to steal its evening meal. One stealthy, hungry cat decided to risk at least one of its nine lives to share in the feast!

Moment by The Bushcamp Company in South Luangwa National Park. 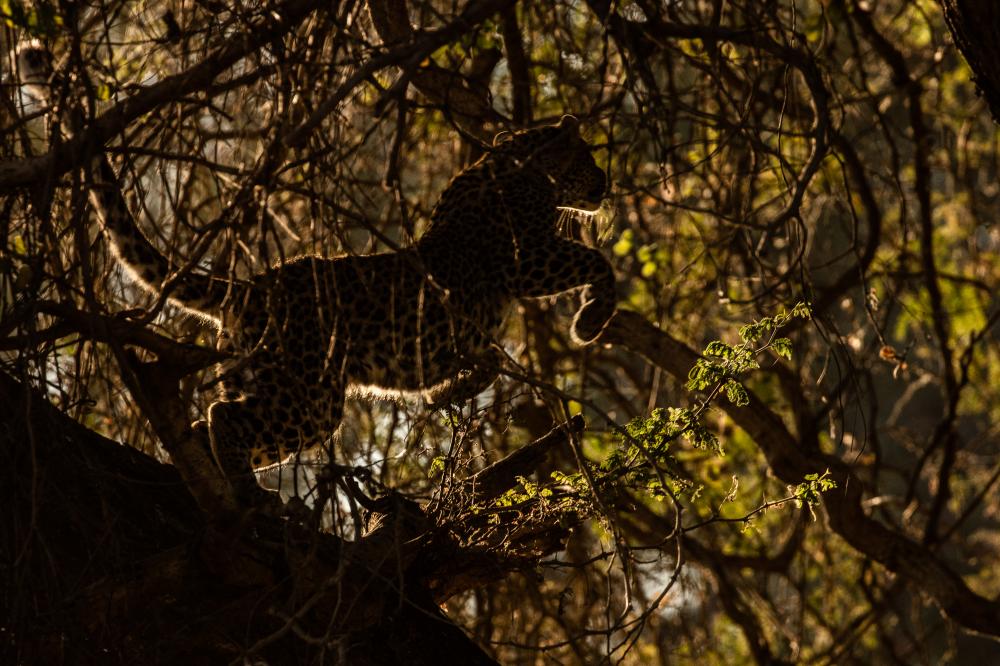 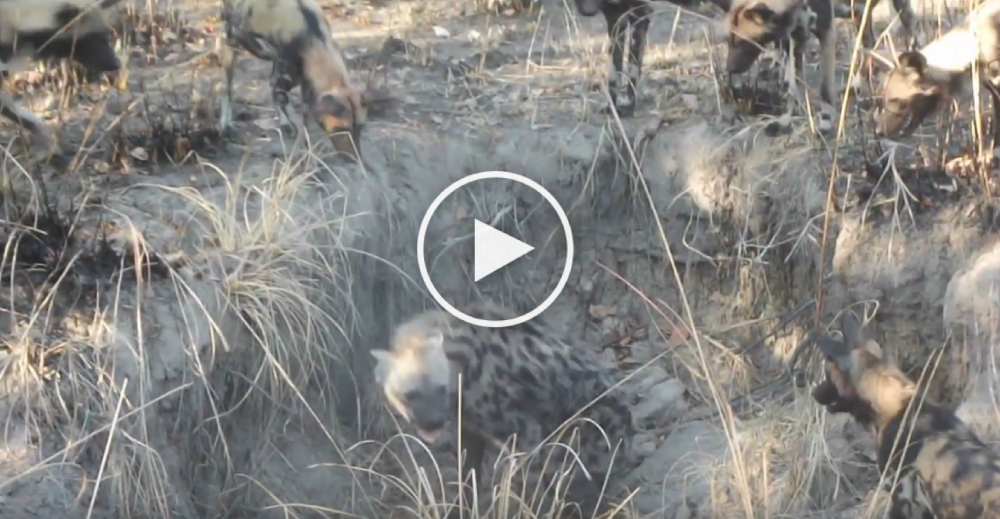 Green Safaris' guides, Jo and Lexon, came across a pack of wild dogs taunting a lone hyena in Kafue National Park. Such an incredible sighting! 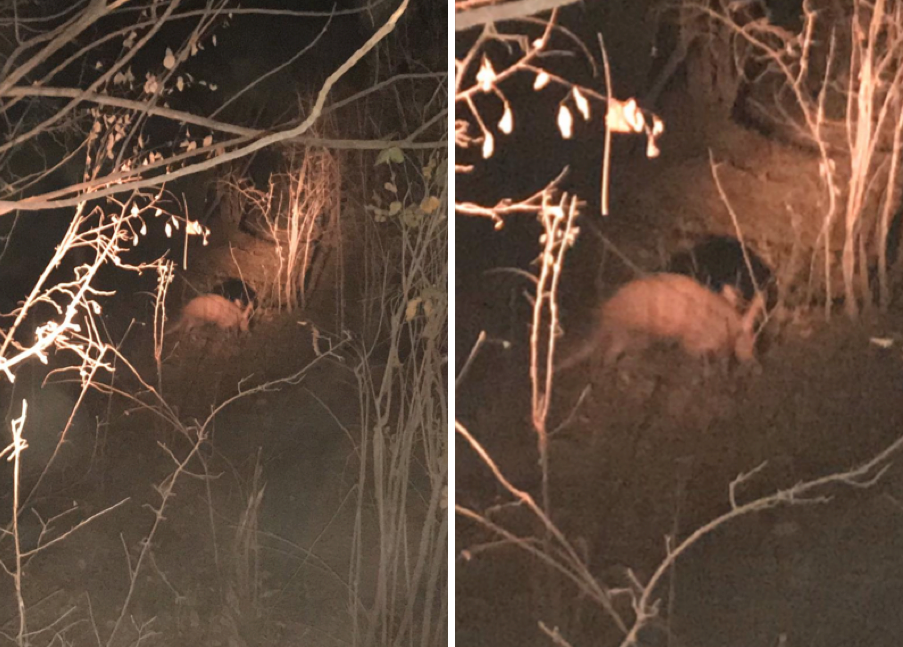 Potato Bush Camp guide, Charles Tembo, was overjoyed to find this very rare and elusive aardvark on a night drive in Lower Zambezi National Park. Aardvarks are notoriously shy and private animals, making them very difficult to spot in the wild. 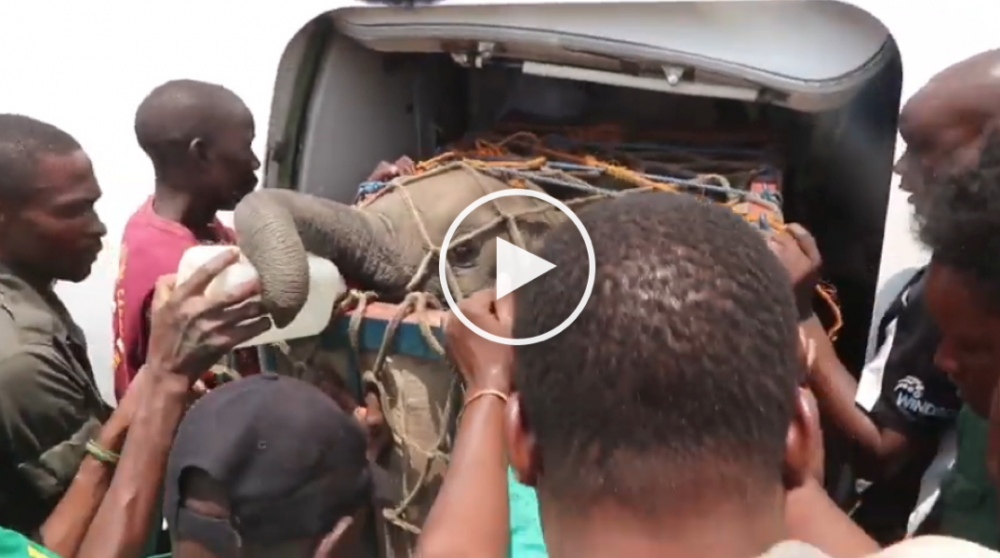 After being orphaned, this one-year-old elephant, named Olimba Mtima (meaning strong heart), was airlifted by Proflight from Mfuwe to Lusaka to start her new life at the Lilayi Elephant Nursery. She was even given her own boarding pass! 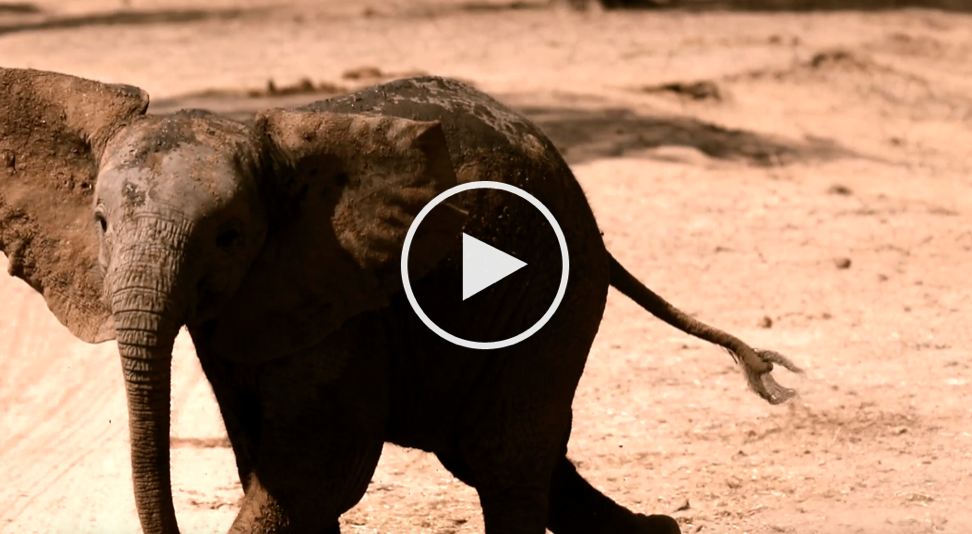 Elephants love to play, and this little one is no exception. Elephants will often roll around in the dusk to keep themselves cool. It's also great for keeping the bugs at bay! 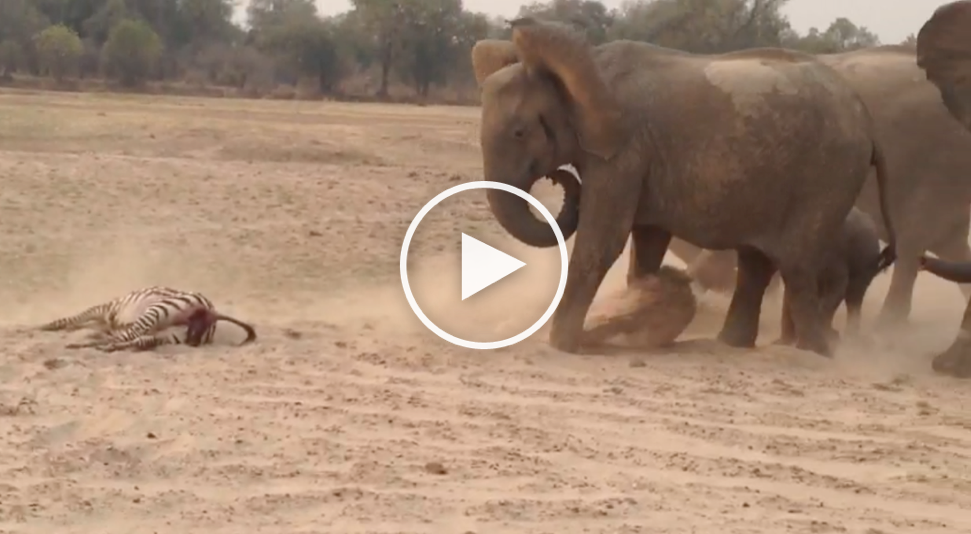 This is the heartbreaking moment a herd of elephants try to save a Zebra foul from five lionesses. Witnessing a kill on safari can be both sad and fascinating - watching nature unfold in front of you.

18. A wise choice for safari-goers 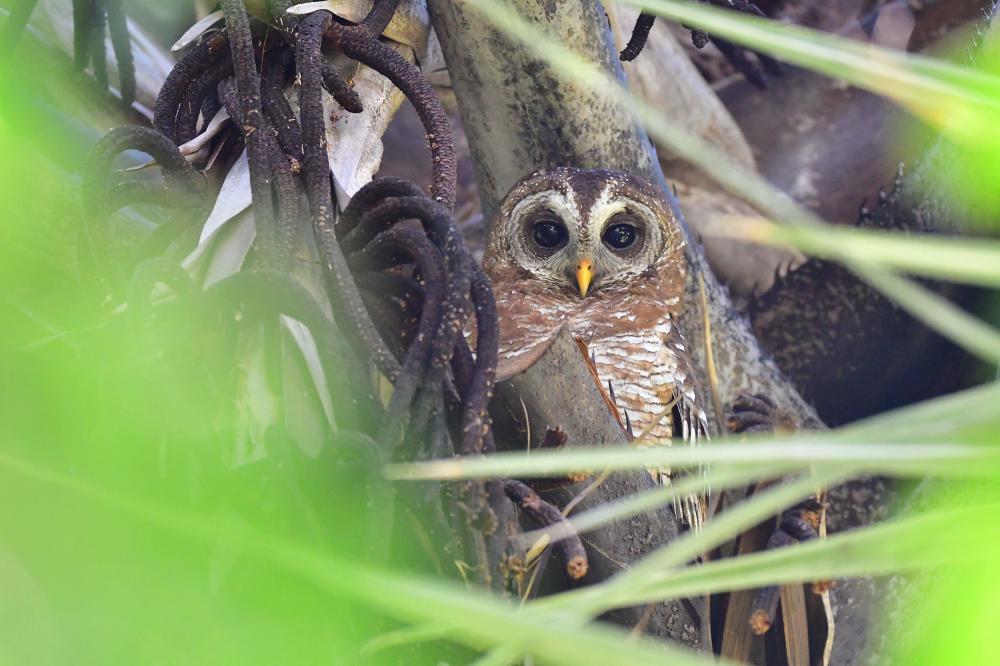 Where better to unwind and reflect on your wildlife moments than at Waterberry Lodge. It's the perfect place to spot birds on the Zambezi River, just 12 miles upstream from Victoria Falls.

Photo by Waterberry Lodge in Livingstone.

19. Up close with a pangolin 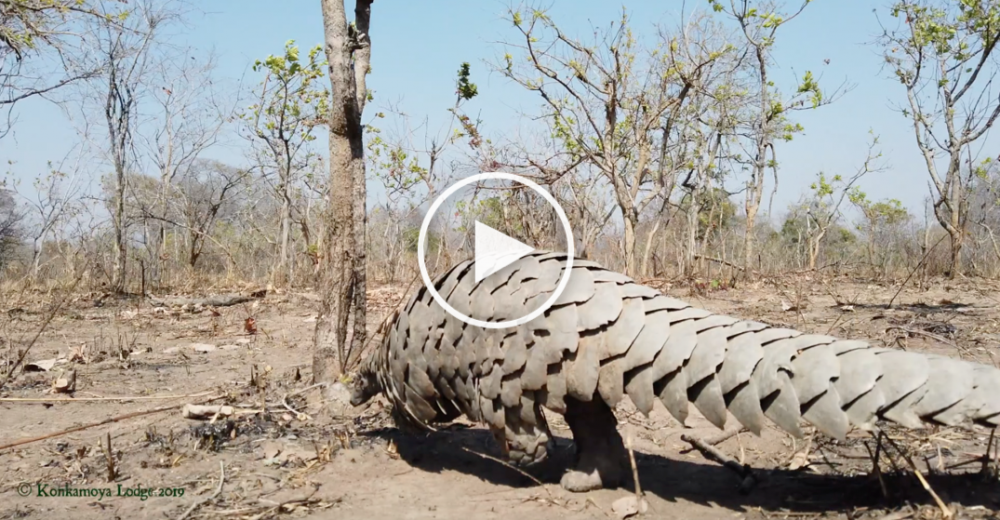 And last, but by no means least, the critically endangered pangolin, captured beautifully by Konkamoya Lodge in Kafue National Park. Have you ever seen one up close?

Five reasons why you should stay in Lake Mburo